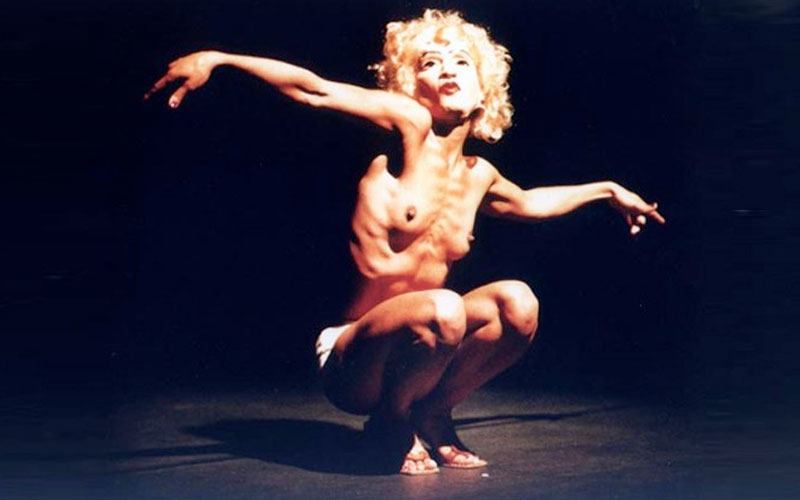 ‚The best thing about the term ‘performance art’ is that it’s so ambiguous; it includes just about everything you might want to do.’
Laurie Anderson

Does it really matter were we coming from and where we going? Do our features reduce us to a Country or Territory? Is what you are wearing representative of what you are? Is your smile a stolen one? If Fred Astaire were born black would he had been the big star on the celluloid? Do I need to know how to dance Samba or play football just because I am darker than you? Are all Germans walking around in their leather pants with a beer in their hands? ‘Do you have the Funk?’ Or are you stealing an attitude? Do you believe that rhythm is in da blood? Watch out, perhaps I will steal your house or pull a gun against you head.

exposure – evenings of solo performance – started with started with readings of an Anthology of solo performers from the 20th century, from the fields of dance, theater, performance art, music, poetry, visual art, cinema, tap dance, cabaret, etc.. Some of their interventions were a tool to address on gender, social and political issues. Mixed with her own personal stories the solo leaves a taste of confusion among audience: Are those staged stories coming from her real life?
The work of Angela Guerreiro starts when she by scanning that information transports it into herself and through her staged body makes it live again under another perspective, her own.
exposure n°6-11 presents a live band Bass player Beat Halberschmidt and Sven Kacirek on the Drums. In these series of performances the solo concept was enlarged, I invite artists from different artistic backgrounds to be part of my solo performance. In four evenings Angela Guerreiro invites the tap dancer Thomas Marek, the singer Leila Pantel, the Contemporary dancer Fiona Gordon and the Trapeze artist Rosiris Garrido.
exposure n° 1-5 was presented at the Festival Manufacturing Dance, Hamburg (2001), Festival Feuer & Flamme (2002), Tanzwochen Münster (2002),Festival Eigenarten, Goldbekhaus Hamburg (2002), 2003 Die Höge – Artist in Residence (2003), and at Schloss Bröllin (2003).

exposure is a sharp, funny and nostalgic performance. From the funky ‘Shake’ to Bach’s Sonate for violine.
Sit back, relax and enjoy the ride!

‘Since I started my work with exposure I have had the experience that what the audience sees and listens on stage, is immediately associated with the personal life of the performer. Performing the performer?
This makes me formulate a very important question: What is the borderline between the performer on stage and the real person?
The separation between these two persons is a very thin line.
I use my personal stories has background stories in order to create new characters and personalities. This allows creating distance between the stage figure and myself.
To translate these experiences and put them into stage means to developed them through an artistic perspective. Staging my life? Fiction or reality? Are these stories important enough to be told?
These questions I put to my self during the creation process of exposure. I try to recreate myself and from the moment I Step on stage that is the moment were authenticity stops and the artistic work starts.’
(Angela guerreiro, talking about exposure)