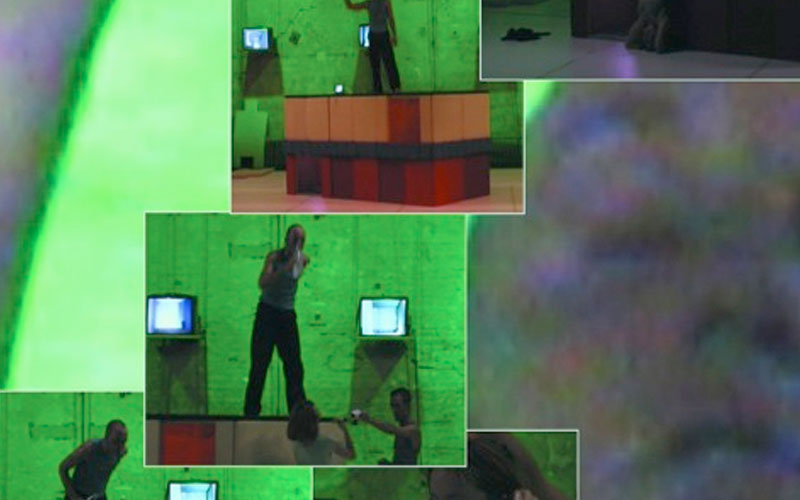 Project X, was the result of a creative process of one and a half month between a choreographer, 4 dancers, a visual artist, a neurologist, a musician and a light designer.
The working process starts before rehearsals with a research and a constant feedback between the neurologist, the visual artist and the light designer for the creation of the room concept before meeting up with the dancers.
The work with the neurologist is to bring up a discussion on the questions of the body regarding perception, language, emotion, and decision-making. The idea is to relate those questions with the environmental space or ‘landscape’ of the working space, the room-concept, together with the dancers. If a dancer is supposed to improvise in a pre-set room how is the body & brain reacting and responding to that stimulation. The dancers will respond to a specific information and to do so the body & brain is involved immediately through complicated mechanisms within our organism. The main goal is that to experience those mechanisms specifically emotion during the creative processes.

Antonio Damasio writes:
‘We are about as effective as stopping an emotion as we are at preventing a sneeze. We can try to prevent the expression of an emotion and we may succeed in part but not full. Some of us, under the appropriate cultural influence, get to be quite good at it, but in essence what we achieve is the ability to disguise some of the external manifestations of emotions without ever being able to block the automated changes that occur in the viscera and internal milieu. Think of the last time you were moved on public and tried to disguise it. You might have gotten away with it if you were watching a movie out there in the dark, alone with Gloria Swanson, but if you were delivering the eulogy for a dead friend: your voice would have given you away. Someone told me that the idea of feelings occurring after emotion could not be correct since it is possible to suppress emotions and still have feelings. But that not true, of course, beyond the partial suppression of facial expressions. We can educate our emotions but not suppress them entirely, and the feelings we have are a testimony to our lack of success.’
(…) ‘Emotions are a complicated collections of chemical and neural responses, forming a pattern; all emotions have a kind of regulatory role to play, leading in one way or another to the creation of circumstances advantageous to the organism exhibiting the phenomenon; emotions are about the life of an organism, its body to be precise, and their role is to assist the organism in maintaining life.’

The world-wide known neurologist A. R. Damasio (”Descartes‘ Error. Emotion, Reason, and the Human Brain” 1994 and ‘The feeling of What Happens-body and emotion in the making of consciousness’ 1999) is invited to participate in Project X. His work and research is part of the basis for this project. The decoding of one of the last secrets of the human being – the structure of the human brain – as well as Damasio’s thesis, that there is no separation of brain and body, are part of the thematic frame of the piece. ”The soul breathes through the body, and suffering, whether it starts in the skin or in a mental image, happens in the flesh.” (Antonio Damasio)

Thanks to: Antonio R. Damasio for our e-mail conversations, Fiona Gordon for her voice, Jochen Büchel, André Huppertz and Frau Miller.

Duration of the total piece: 80 min.