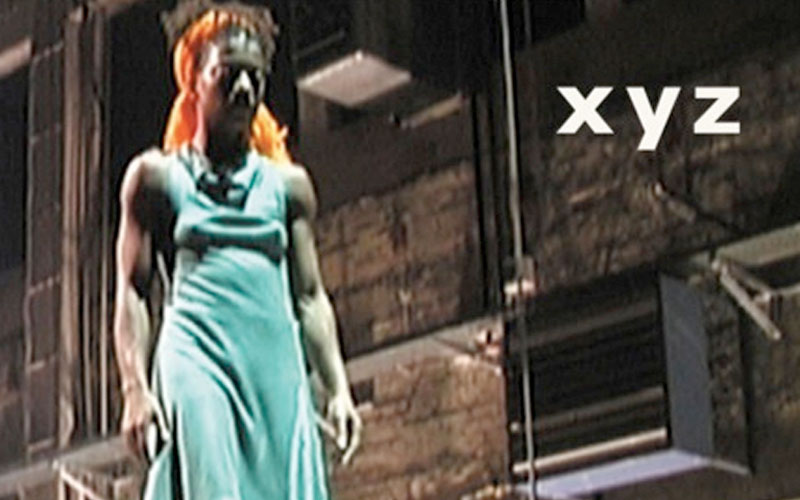 The end of the trilogy X, Y and Z
by Angela Guerreiro
The trilogy began with Project X (2000), a second production with Project Y (2001) and finishes with Project Z with a Premiere on March 7, 2002 at Kampnagel Hamburg.

While the main thematic for X was Emotion, in Y Perfection, the main issue in Z will be death. The formal idea for Project Z remains the same: it gathers 5 dancers (Einat Tuchman, Cristina Moura, Nir de Volff, David Kamplani, Jo Stone), a room concept done by Paul gazzola, music by Beat Halberschmidt and light design by Sérgio Pessanha, long term collaborators of Angela Guerreiro choreographic work. To invite scientists, artists during the creative process is of course one of the projects goal.

Death – the story so far
Death, although all but eliminated from our society’s day-to-day consciousness, remains the final reckoning, the sense-eliminator, but also a driving force for science and art.
All the religions have managed to alleviate the burden of questions as to the sense of life in the face of the reality of death through metaphysical conceptions of the world in which there exists an after-life in heaven or reincarnation. And yet the advance of the scientific world view has contributed to the decline of religion and has left the individual in a state of appalling helplessness in the face of death. Only the suppression from daily awareness and tremendous advances in medicine has enabled our society to deal with this question in a stable way. The latest developments, however, seem to show that the sciences are coming ever closer to a new answer to this most unanswerable of questions.

During the past century the modern sciences, especially medicine, have managed to drastically raise life expectancy and radically to decrease the rate of mortality. Epidemics appear, to a great extent at least, to have been brought under control. With a horrified shudder, we look from the perspective of the Western countries of the so-called First World into regions where, on average, life comes to an end at 40 and where only one in four children survives – like some gruesome vision of our own past. (It remains an open question whether cancer, AIDS, or new outbreaks of the supposedly ‘conquered’ foot-and-mouth disease simply represent a setback or rather demonstrate the ultimate hopelessness of the battle.)
The deciphered genetic code and the newly-discovered possibilities arising from it will, at any rate, usher in a new quality in the battle against bodily decline. (We can choose to overlook the fact that there is a huge amount of money to be made with biotechnology and the patenting of genetic information.) The current, highly-lauded possibility of treating hereditary diseases through genetic operations is simply a by-product in the battle against the fatal human timeplan, determined in the cell division. And even the ethical discussions about the cloning of human stem cells won’t prove an obstacle in the long run: the “masterplan” is the triumph over death.

The new body
Our own perception of the world appears to us as natural, despite travel by aeroplane, communication via computer etc. (This is partly because we believe that we are in control due to our critical awareness of our state of alienation.) How must it have been in centuries gone by, when a journey of 500km lasted several weeks instead of several hours, when you were entering the final phase of your life at the age of 35? Those who look upon microprocessors implanted into the body and other forms of man-machine as an appalling intrusion into human integrity presumably don’t still have a problem with pacemakers or organ transplants.
Anyone who spends hours of his day in front of a computer screen absorbed in internet communication, video games or other forms of simulated reality has expanded his world with additional experiential spaces, just as does the user of radio and television. Are we still aware of a reality in which these simulated worlds did not exist? The music lover who is accustomed to listening to his favourite classical orchestra music on a good hi-fi is himself only a few steps away from the programming of sensory perceptions direct into his brain. Today’s middle-aged man uses loads of technical devices and yet looks sceptically at the predictions (those predictions which our computerkids are already experiencing to a degree), considering them dangerously divorced from reality. And yet a prior condition of non-alienation from Nature is simply a myth about times gone by of which we can only conceive with difficulty. Today’s human, well-equipped in his communicative capabilities through connection to a computer or to a mobile telephone, is in a process of development, along with the extended lifespan.

Maybe one day our brain will say: “I feel utterly strange today, as if my body didn’t belong to me any more.” But this is a feeling which we know already. Dephysicalisation is one of the perspectives of this future.

Is it perhaps just frivolousness, fun with science-fiction fantasies or an attempt to escape from the Here and Now to think about these things? The feeling is one of experiencing the introductory stage of a radical change in the world, qualified by sweeping technological alterations, which promises to redefine everything: perception, body, reality and even death itself. Consequently it sometimes feels rather pointless to spend time considering today’s world and its changeable nature, faced with the suspicion that the world as we know it is about to come to an end. But then, sometimes it seems equally senseless to devote time to thinking about a world about which we have only the vaguest of ideas, and about which each conjecture seems blown up out of proportion and contestable or, on the contrary, limited and conceived without real vision.
In any case, such transitional phases offer great opportunities for insight, because we still know “The Old” and “The New” is only just beginning. It is not the theme of this performance to take a moralistic standpoint with regard to how life is changing in the face of technological development; rather to demonstrate art’s ability to anticipate, approach and to create a discussion on such themes. The changes which are being discussed here will take place through transformation of the body. When the Extropianers allow their brain to be frozen in the hope of receiving a new body sometime in the future when technology has developed to its logical conclusion, this creates an interesting conflict with the thesis of the neurologist Antonio Damasio, whose work provided ‘Project X’ with its fundamental principles. Damasio contradicts the separation between rational thinking and the emotions, and likewise the separation of brain and body. The body, according to Damasio, is the “landscape of the brain”, the brain experiences the world through the body. And therefore intrusions into or operations upon this system, assuming that they are viable, will result in changes to humanity as we know it.